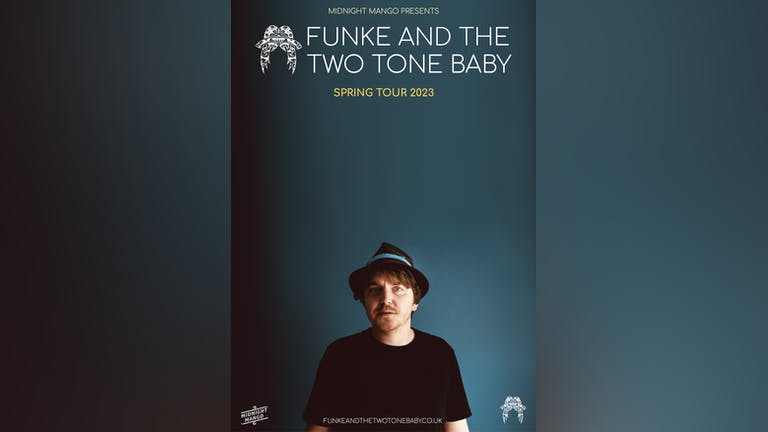 Go to any gig and you get the acoustic opener, the big main band and the afterparty DJ. Fuse them together and you’re starting to get close to Funke and the Two Tone Baby. A one-man phenomenon that mixes folky singalong anthems with blistering blues riffs, juxtaposed with fat bass, big beats and sub kicks. A frenzied amalgamation of organic and electronic that defies all preconception.
Born from festivals and knocking on the door of 1000 shows, F&TTTB has wowed audiences from Glastonbury to Sziget, WOMAD to Boomtown and Alexandra Palace to a Bahraini Princes’ private studio.
He has also secured support tours and shows with Skinny Lister, Dutty Moonshine Big Band, Comet is Coming, Beans on Toast, Hazel O’ Connor, Ferocious Dog, Hayseed Dixie, Mark Chadwick (Levellers) and many more.
A lo-fi peach with orchestral depth, a DJ without decks and a blur to the eyes, Funke generates huge sounds from seemingly nothing and sweeps up audiences in an awestruck wave of power, energy and sweat. A truly unique act that needs to be seen to be believed.

Support comes from the incredible.

Andy Twyman
--------------
Andy’s one man band act is a unique blend of soulful blues music with raucous boogie, comedy, cabaret and rock and roll. The result is an exciting and entertaining show packed with heart and humour. Andy has found a place as one of the most original emerging acts on the circuit today. His distinct style has been heard and seen at Glastonbury Festival, on BBC Radio 2 and Channel 4.