This event has already happened! Click here to see upcoming events from NorwichComedy 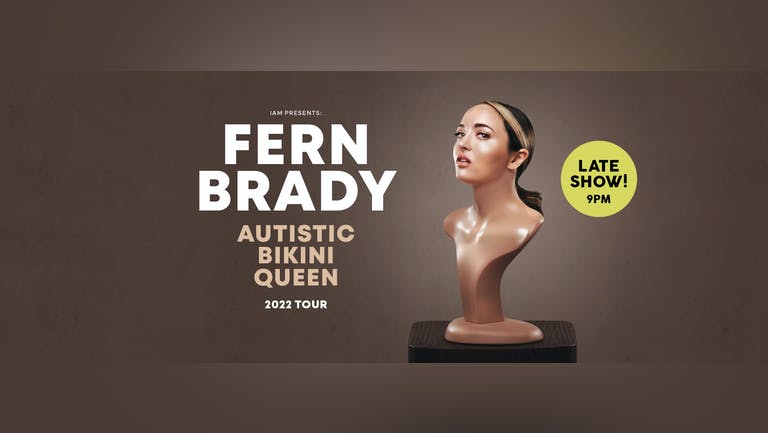 *** Tickets are on sale now. Please ensure you know which show you are buying tickets for! ***

One of the UK’s most exciting comedians, Fern Brady is heading out on a nationwide tour of her fifth solo show Autistic Bikini Queen.  Starting in Salford on 25th January and ending in Glasgow at the Kings Theatre on 17th March. This comes hot off the heels of her previous sell out show “Power & Chaos” which was filmed as a special and broadcast on BBC One.  She also co-hosts the hit BBC Podcast “Wheel of Misfortune” where she discovers and shares embarrassing moments from the general public and celebrity guests.

Fern has been regularly appearing on shows such as Don’t Hate the Playaz (Itv2), Stand Up for Live Comedy (BBCThree), Live from the BBC (BBC Two), Live from the Comedy Store (Comedy Central), The Russell Howard Hour (Sky One), Frankie Boyle’s New World Order (BBC2) and Live at the Apollo (BBC2) (the first Scottish woman to do so).  As a result Fern is one of the UK’s hottest comedy stars. Known for being totally unique and completely fearless, her caustic wit, exceptional writing and electric stage craft has made Fern one of the UK’s hottest comedy stars.

Other credits 8 Out of 10 Cats, Comedy Central’s Roast Battle and Seann Walsh’s Late Night Comedy Spectacular. Fern has also appeared multiple times on BBC Radio 4’s The News Quiz, The Now Show & BBC Scotland’s political panel show Breaking the News. Brady wrote a sitcom pilot for BBC Three (Radges) which has since been optioned by BBC Worldwide and sold to Snapchat in the US. Other US credits include her stand up album Male Comedienne which was released as an album in the US.

What the press have said about Fern Brady:

Early reviews of Power and Chaos from Australian press

You are buying a ticket for the LATE SHOW .

The venue's bar & pizza restaurant will be open from 4pm. The late show starts at 9.00pm Please arrive early to be seated.