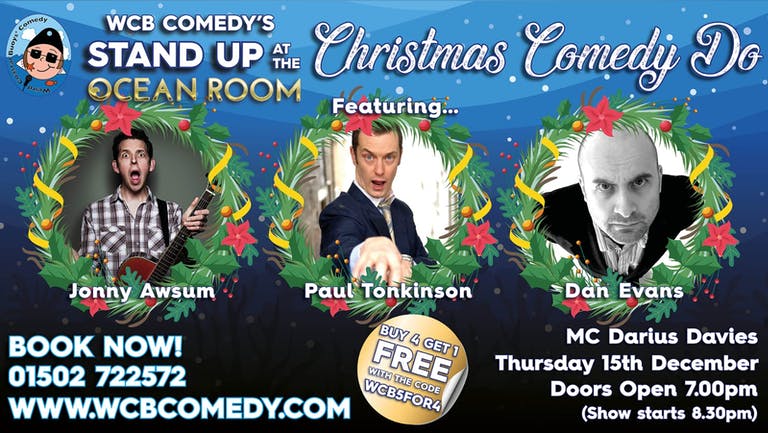 WCB Comedy are proud to announce a fantastic Christmas Stand Up Comedy Do at the Ocean Room with a brilliant line up including the absolute best comedians in the land. What's more, as a thank you to those special people who have supported us by dragging their friends along to all our gigs this year we are giving away a free ticket for every 4 that are booked for this show.

In the last 12 months WCB Comedy at the Ocean Room has rightly built a reputation as the best comedy night out in the county. This promises to be the best yet.

As well as our brilliant MC Darius Davies, we have three headline acts who will make this your most memorable night out over Christmas.

Our closer is Jonny Awsum who is an award-winning comedian who has charmed audiences all around the world with his high energy performance style and unique brand of musical comedy.

After building the best reputation on the UK comedy circuit, Jonny shot to national fame on Britain’s Got Talent. His TV performances won standing ovations and unanimous praise from the judges and went viral on the internet, racking up over 50 million views on YouTube.

Our opener is Paul Tonkinson who is an absolutely sensational live performer. Paul is a former (double award-winning) Time Out Comedian of the Year and has long upheld his esteemed reputation as one of the finest stand-ups the UK has to offer.

He gained more exposure as presenter of BBC Two's The Sunday Show and TV viewers will recall he landed the job as Johnny Vaughan's replacement on The Big Breakfast back when telly was good.

“HILARIOUS; NOBODY MAKES ME LAUGH LIKE PAUL TONKINSON. SIMPLY ONE OF THE GREATEST COMICS AROUND. GO SEE HIM!”

Finally, our middle spot Dan Evans first appeared on the comedy circuit in 1994.

Over the past decades his twisted logic has delighted the nation. As well as playing clubs and universities throughout the UK, Dan has gigged in Holland, Germany, Dubai and Ireland as well as being part of the sell-out Screaming Blue Murder Cabaret and Avalon Comedy Zones at the Edinburgh Fringe.

Dan's TV and radio appearances include Brain Candy (BBC3 & 2), Channel 5 at The Store, Channel 5 Comedy Zone and the Radio 2 Stand Up Show.

His many writing credits including work for The Very World of Milton Jones, Rory Bremner Who Else?, The Eleven O'Clock Show, The Live Floor Show, Revolver and The Joan Rivers Position.