This event has already happened! Click here to see upcoming events from The Vault Nightclub 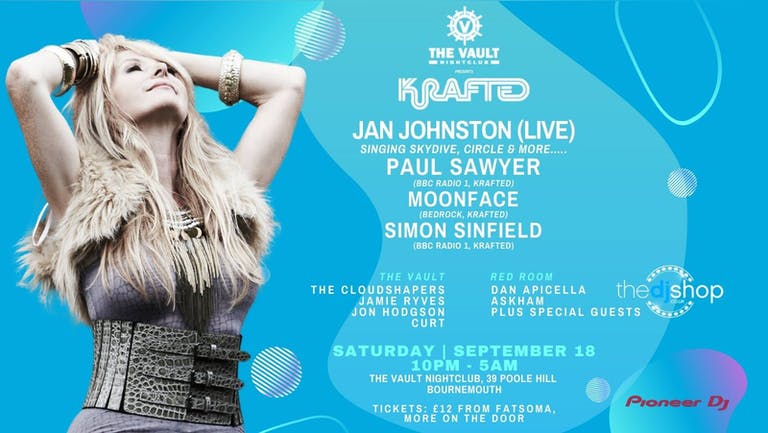 Up The Anti @ The Vault Presents KRAFTED

By The Vault Nightclub

Up The Anti @ The Vault Presents KRAFTED

Krafted has been pushing the boundaries of music since 2013 with a range of labels covering many bases, from Chillout beach vibes to full-on Progressive House and Melodic Techno.
Already enjoying a huge roster of artists, Krafted have signed releases from artists including Hernan Cattaneo, Nick Muir, Sunscreem, Dave Seaman, Priya Sen, Mononoid, Betoko, Marc De Pulse and many more.
Since its inception, Krafted have organised events globally including residencies at Egg, London and Ministry of Sound. Taking the brand to Los Angeles with headliners Mr C and Doorly, as well as a regular event at Amsterdam Dance Event and one-offs in Rotterdam and various Cities in the UK.
Most recently Krafted have been resident on BBC Radio 1 with their own show each month showcasing the talents of their roster.
Launching this September, Krafted host a monthly event at The Vault Nightclub with the Queen of Trance Jan Johnston who is known for her huge anthems including Skydive with Freefall, Calling Your Name and numerous releases with Paul Oakenfold, and BT.
Jan Johnston’s recent collaborations with Paul Sawyer include Circle and One Step Beyond, with Paul Headlining the event alongside Jan and joined by ex Bedrock resident DJ Phil ‘Moonface’ Thompson and Krafted’s very own Simon Sinfield. All three DJ’s were also hosts on Krafted’s show on BBC Radio 1.
The DJ Shop plays host to the Red Room with Classic Trance brought to you by Dan Apicella and Askham who have both featured at events including Judge Jules Judgement Sundays, Gatecrasher, GodsKitchen and many more over the years.
The Vault aimed at providing the best Tech House Krafted have to offer with some of the Krafted Digital label recent artists.