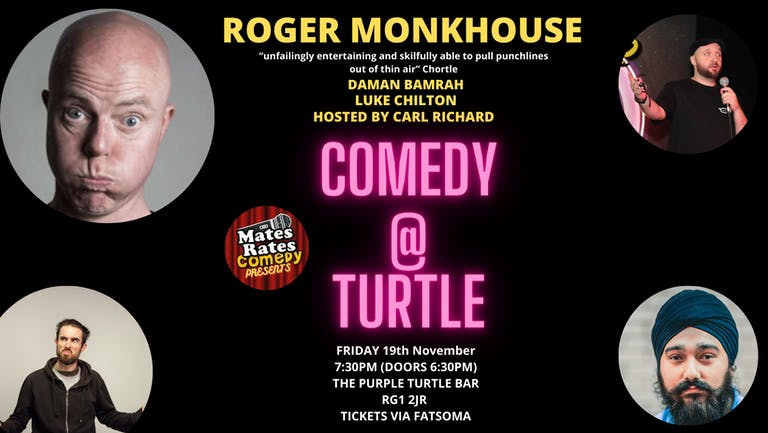 Stand Up Comedy in Reading is back. Mates Rates Comedy is proud to present Comedy at Turtle with Headliner Roger Monkhouse.

Roger Monkhouse is one of the most original and distinctive acts on the comedy scene. A consummate stand-up who employs a deadly combination of charm and menace to exert a masterful control over any audience. A highly original and quirky performer, Roger’s trademark stage-prowling style and curious, inimitable manner have established him as one of the hottest names on the comedy circuit.

Daman began performing improv while at university and went onto train with the prestigious ‘Second City’ before applying his skills to stand up. Since then he has built up his accolades racing to the semi-finals of So You Think You’re Funny?, and being a finalist for the Max Turner Award, Monty’s Stand Up Nights, Comedy Virgins Summer Competition and winning Up the Creek’s notorious new show The Blackout.

Luke Chilton regularly performs at top comedy venues across London including Up the Creek, Downstairs at the Kingshead, Angel Comedy and Vauxhall Comedy Club. He has provided support for Jack Whitehall, reached the final 10 of BBC New Comedy Award 2019 and was nominated for Up the Creek: One to Watch 2019.