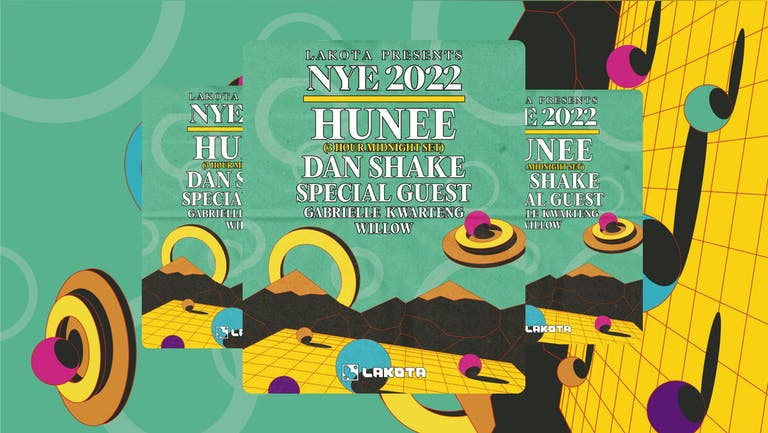 -- LAKOTA NYE 2022 --
For the final dance of 2022 we’ll be transforming Lakota for a very special night like no other.
Spread across 3 rooms with spectacular decor, we’re pulling out all the stops to mark the end of the year - in which the club celebrated its 30th anniversary - and welcome the next chapter of this iconic nightclub.

HUNEE
To headline, we’ve invited one of the most loved & respected selectors of the last 10 years in Hunee, for his 3rd Lakota headline show! Playing a 3 hour set including the midnight hour, his signature sound spanning world music, house, italo, disco, techno & more will have the club grooving into the new year.

DAN SHAKE
For someone who admits they “never actually wanted to be a DJ” Dan Shake has positioned himself as one of the most popular and go-to names in the dance music scene.
Having been heavily influenced by the 90s hip hop and Detroit house scene, these days as a DJ/producer he now deals in the sonic sphere of funk, disco, and house and is known for his relentless energy behind the decks.
After a sold out show before lockdown we felt a return for Dan behind the decks was long overdue.

GABRIELLE KWARTENG
New York City native Gabrielle Kwarteng’s musical beginnings stemmed from her listening to her parents’ cassette collection of Ghanaian highlife, Nigerian Afrobeat, American disco, soul, and jazz.
Having lived in London and Paris and travelled far and wide, Gabrielle has amassed a vast music collection – both vinyl and digital – that enables her to seamlessly weave between disco, house funk, jazz, and soul.

WILLOW (UK)
Sophie Wilson - aka Willow - made her introduction to the scene in 2016 with her debut track ‘Feel Me’.
When the veteran DJ ‘Move D’ heard her track playing off nothing more than an iPhone speaker at Gottwood, he insisted she send him the track.
Fast forward a year and Move D had everyone talking about her track after he played it in his Fabric 74 mix, and ever since then he has continued to champion her undoubted talent.
Willow has carved out a name for herself pushing a distinctive yet hard to define style that combines dubby textures, leftfield house and ambient techno together.

TICKET INFORMATION
**Please note that buying a ticket for this event is only valid for the event taking place in Lakota and will not grant entry to the Coroner’s Court part of the site.**
Last entry is strictly 23:00 (unless you have a late entry ticket) after which tickets are invalid. There is no re-entry permitted.

Please note that tickets for this show are ONLY valid for the event taking place in Lakota (i.e. it does not grant entry to the Coroner's Court part of the site).

Ticket holders will not be permitted to move between the two different NYE events taking part in the two venues.