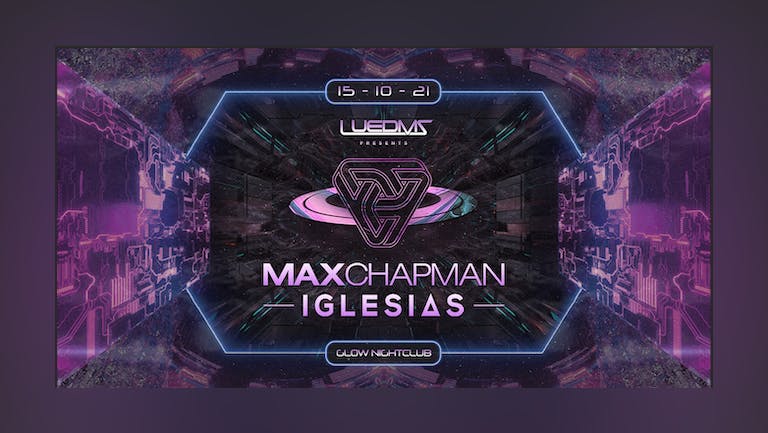 We’re back! LUEDMS finally returns on Friday 15th October to kick off our 21/22 season, and we’re proud to announce that we will be joined by Max Chapman and Iglesias for a massive night of rhythm and grooves⚡️⚡️

After having George Smeddles over at LUEDMS as our last Headliner before the pandemic, we felt it only right to invite his Resonance Records label co-owner Max Chapman over to Lancaster and show him how we throw a party! An experienced industry heavyweight, Max Chapman’s infectious personality and incredible productions have understandably made him an industry favourite in the underground scene. Topping the Beatport Tech House charts with ‘Body Jack’ and ‘La Fiesta’, it is evident why industry legends such as Jamie Jones and Richy Ahmed support Max’s work. We are thrilled to see what Max has in store for us!🔥

Supporting Max Chapman is the master of drum grooves, Iglesias. With show stealing tracks such as ‘Subdue’, ‘Blah’ and ‘Been A Long Time’, Iglesias’ sound has amassed a massive following. Over the past several years Iglesias’ infectious beats have seen releases on dominating labels such as Elrow, Sola, Repopulate Mars and Solid Grooves Raw to name just a few - and entering the Top 100 with each of the 100+ tracks under his belt , it is clear that whatever Iglesias gets his hands on, he ensures to make his own.

Our residents Will Farrar, thevibeiskal, and Laycock will be opening and closing the night to ensure that you get the full LUEDMS experience.

With that being said, we are beyond excited to see you all at Glow Nightclub on the 15th of October for what is bound to be a night to remember!💃🕺

Look out for set times which will be released shortly.

£6 OTD before Midnight / £8 after Midnight

£6 Before Midnight / £8 After Midnight