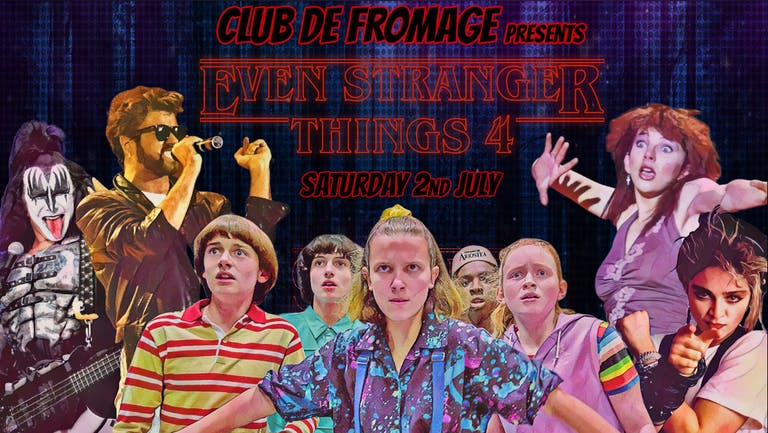 The finale of the fourth series of Netflix' Stranger Things is due on July 1st, so join us at Club de Fromage as we celebrate 1980s pop culture with the return of one of our own legendary Even Stranger Things partiesl

As well our usual mix of pop classics from all decades, you can expect an extra helping of retro bangers from the 80s from bands and icons such as Madonna, Prince, Tina Turner, Whitney, Lionel Richie, Wham, Bon Jovi, Tiffany, Cyndi Lauper as well as hits from the series such as 'Running Up That Hill', 'NeverEnding Story', 'You Spin Me Round' and of course 'Africa'

We’ll have some 80s props on stage and plenty of nostalgic clips on our screen to make you think you were actually in the 1980s.

Other than the aforementioned 80s classics you can also expect to hear anything from S Club to Madonna, Bon Jovi to Taylor Swift, The Killers to Queen, Whitney to Dolly, Beyonce to Gloria Gaynor, Ariana Grande to Prince, we'll throw in all sorts to keep the dance floor jumping!

Dress in our best 80s outfits, as your 80s pop idol or your favourite character from the series, everyone in fancy dress gets to Queue Jump