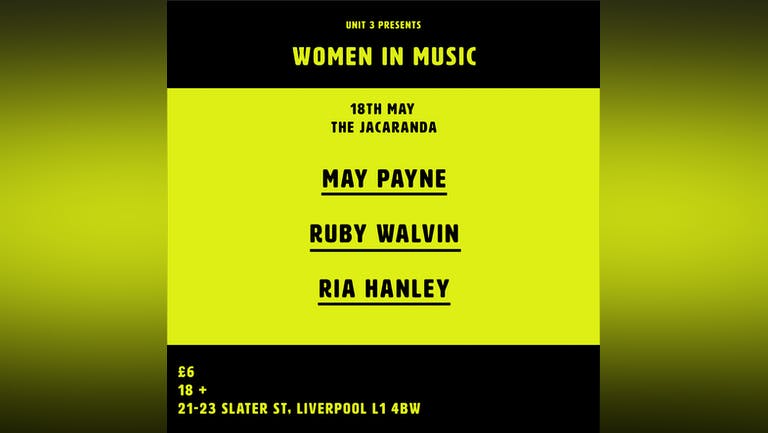 Unit 3 Presents Women in Music, a showcase of some of the finest female talent from the North West of England.

Manchester's May Payne will bring her brilliant show to Liverpool for the first time. Growing up on a diet of Bob Dylan and Van Morrison, May has developed an intricate, intelligent songwriting and the nostalgic sound of a clean, tight ensemble. Her latest single, 'When You Hold Me' fully demonstrates her sensitive melodies, which are underpinned by warm, satisfying harmonies in a delicately beautiful arrangement that you'll instantly fall in love with.

Liverpool based Ruby Walvin brings 60s tinged indie tunes, driven by her mellow voice and honest lyricism, which are sure to take you on a powerful sonic adventure. Priding herself on her honest lyric writing, she describes her genre as Alternative/indie songs washed in 60’s fabric softener. Her retro inspired songs embrace subjects like love, heartbreak, and hope. Ruby’s first release, The Game, a sincere heartfelt song about her devastating cancer diagnoses, was used in a Teenage Cancer Trust Campaign. In 2021 Ruby released her second single, Without You a sincere track about heartbreak and moving on. This received Track of the Week with BBC Introducing. Her most recent release Minus Five is a dreamy love song, that would fit nicely into the libraries of fans of Alex Turner and Lana del Ray.

Ria Hanley is a Liverpool based singer-songwriter, known for her intricate riffs and her voice full of soul. Having been influenced by an array of artists, including Blondie, Alicia Keys and Emeli Sande, her unique tone has been able to captivate audiences effortlessly.