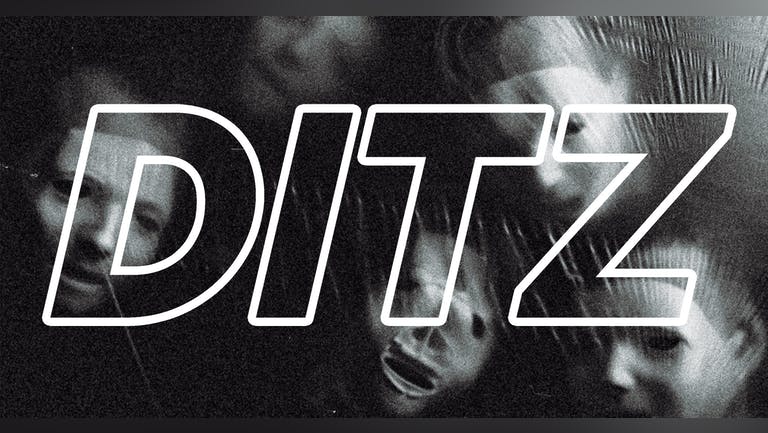 “Post Post-punk” - Steve Lamacq
DITZ create forward-thinking noise rock/post-punk which features vast arrays of pedal effects with influences from 80s and 90s post-hardcore and noise rock. DITZ released their debut EP ‘5 Songs’ for Alcopop! Records in 2020 featuring their singles ‘Total 90’, 'Role Model’ and their cover of Peaches’ ‘Fuck The Pain Away’. This received plaudits from some of the UK’s premier new punk bands, IDLES and Slaves, as well as media fuss from DIY, Loud & Quiet, So Young, The Line Of Best Fit and more.

Entrenched around Rachael Whittleʼs swaggering, off-kilter though decidedly arena-sized compositions, Pave The Jungle formed in Newcastle-upon-Tyne in 2019. With the addition of drummer Scott Jeffery the duo was completed that spring, and over the ensuing summer the pair took to Blank Studios (Pigsx7, Richard Dawson, Du Blonde) to record debut EP ʻThe Hissingʼ. Pave The Jungle have been tipped by BBC Music Introducing and BBC Radio Newcastle as 'Ones To Watch' for 2022.

SPORTING TIES A nonsense of the mind Post Punk outfit based in and around the north east. Carrying Influences from modern bands like Shame, Fontaines D.C., Black Midi, LIFE and Squid, While simultaneously providing very traditional and vintage presence and energy. The hodge-podge of influences and ideals makes for a quite unique blend of dark and mature riffs with humour and words that don’t take themselves too seriously.