This event has already happened! Click here to see upcoming events from bloc. 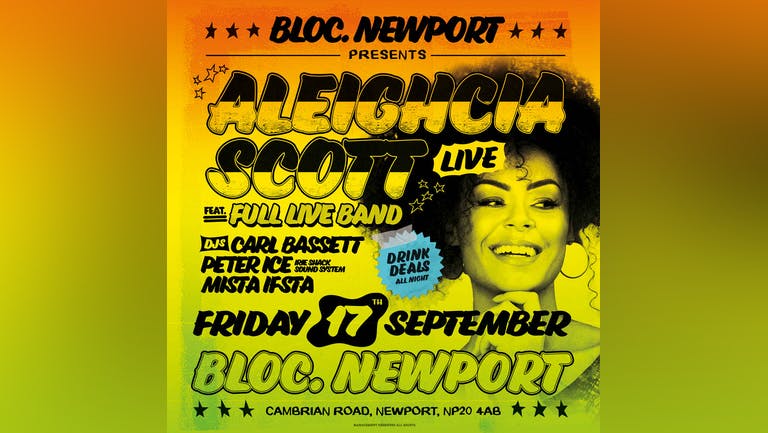 The biggest and best club in Newport hosts a night of celebrations and party bangers across our multiple floors and club rooms. With resident and special guest DJs lining up the very best chart, urban, house, techno and dance.

Aleighcia Scott is a Cardiff born Welsh-Jamaica reggae artist. Her debut album was recorded in Jamaica and the UK and produced by legendary Rory Stonelove who's previous credits include work with Beyonce and Jay Z.Aleighcia has won various awards such as Radio Cardiff's Best Local Artist and is a double winner of the MMG award for 'Best Reggae Artist'. Aleoghcia has performed at Glastonbury, BBC Introducing and numerous international stages.

We're pleased to welcome Aleighcia and her full band, for the first of many live gigs at bloc. Performing her original hits and favourite reggae, RnB, soul jams. Supported by special guest DJs Carl Bassett, Peter Ice and Mista Ifsta, playing the finest reggae, dancehall, soul, urban and more until 5am.

** LEGACY **
Latest charts to the greatest classics on our open-air clubroom.

*subject to capacity. Note: Admission may increase on the door.

18+.
Tickets are non-refundable or exchangeable.
Management reserves all rights.