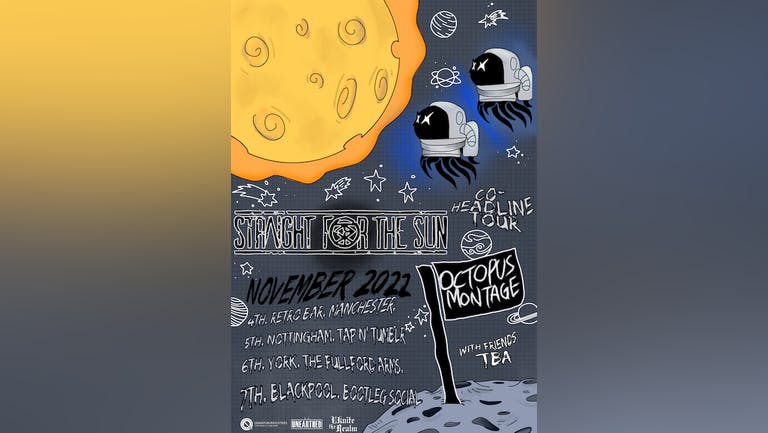 Straight For The Sun with Octopus Montage

Straight For The Sun with Octopus Montage

Straight For The Sun are an Alternative Metal band from England, UK.

Formed in Birmingham by Tom Haywood (Rhythm) and Pauly Barter (Lead), Straight For The Sun quickly established themselves on the local club circuit as a high energy band before recruiting Jamie Human (Drums), Oz Jackson (Bass) And Callum Green (Vocals) to complete the lineup in late 2017.

The band released their first single ‘Villains’ (Recorded at Robannas Studio – Producer Miguel Seco) as well as their first UK tour of the same name in early 2018, and later became finalists for Metal to the Masses, Mammoth Fest, Godiva Calling and HRH Highway to Hell competitions.

Their second single ‘Sirens’ ( Recorded at SLL Studios – Producer Jay Shredder) was released late 2018, followed by the first of two BMA Nominations in early 2019 before their third single ‘Unbound’ was released in wake of the band’s debut EP ‘No Tomorrow’ – which was release during a packed 02 academy 2 headliner.

With the success of the their first EP, they embarked on another UK tour during the months of Aug/Sep 2019 and would end the year on a high supporting the likes of Skindred at ‘Night of the Living Dred’ along with various Kerrang! DJs, and then finally supporting Uriah Heep with Diamond head at KK’s Steel Mill.

2020/2021 saw the band release their forth and fifth singles ‘Walk’ and "Remember Me", with their sights firmly on their first album.