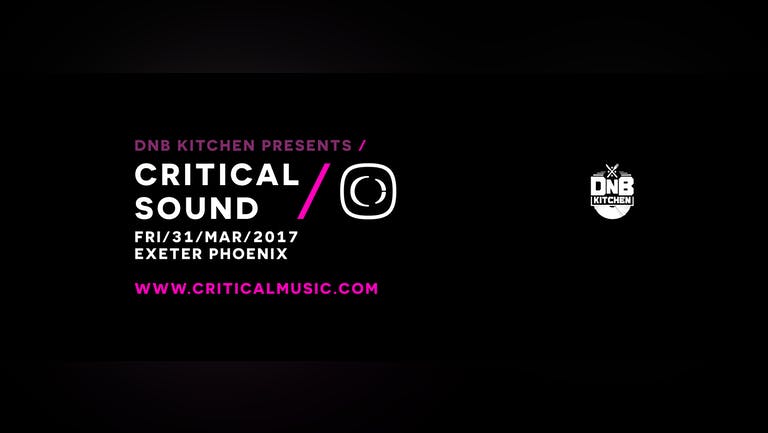 Fresh off the back of our most recent event with SpectraSoul & SP:MC, we are immensely proud to bring to Exeter for the very first time… CRITICAL SOUND!

Conceived by D&B visionary Kasra back in 2002, the Critical Music name has since blossomed into one of the most successful independent record labels in the UK today. Grown from a simple idea driven by a commitment to putting out the best music the scene has to offer, it has now become one of the most well respected electronic dance music labels in the UK. Nurturing new talent and releasing some of the freshest breaks and beats from the cream of the scene, it has gone on to build a loyal following around the world driven on by Kasra’s never ending quest to release quality underground bass music. Not only a record label, the Critical empire now boasts its own highly esteemed club nights with a residency at Londons world-renowned Fabric night spot, as well as regular branded Critical tour nights across the UK and abroad. Drawing in familiar faces from the world of D&B you can be sure each and every Critical Sound event is programmed to perfection, with leagues of fans attending each one in abundance. Ever-evolving the label has recently substantiated itself even more so with a finely tuned squadron of the world’s most talented producers, Austria’s Mefjus, Russia’s Enei as well as UK talents Ivy Lab, Sam Binga ,Emperor, Foreign Concept and Hyroglifics each having proved themselves to be the shining lights of the new generation of drum & bass artists. The label nights continue to prosper across the UK, Europe, North America, Australia & New Zealand as well as an increasing presence into the music festival circuit. As the label moves on you can be sure to expect a plethora of stunning new music and albums releasing on a variety of formats, the future most certainly looks very bright indeed as we celebrate nearly 15 years of bass-fuelled, ear-pleasing years of Critical Music. Keep it locked. Keep it Critical!

No Thugs, Drugs or Uggs

**POWERED BY FULL FUNKTION ONE**