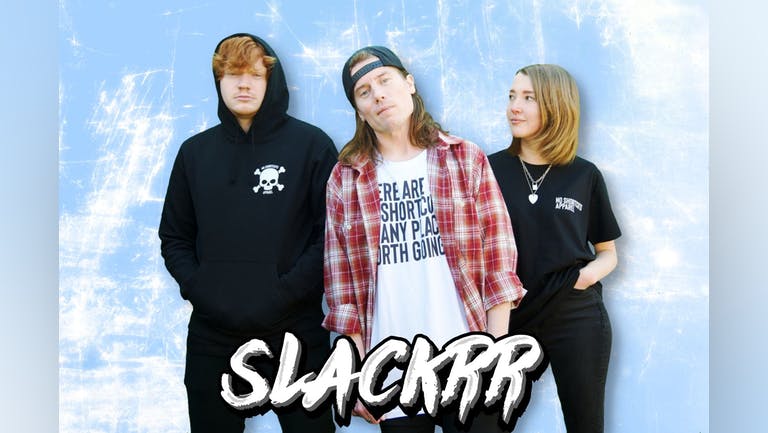 Age restrictions: 14+ (under 18's must be accompanied by a parent or guardian)
The Chapel Live and promoted by Brown Street
1133 Followers

Slackrr are easily one of the most talked about bands in the UK underground circuit right now. Hailing from

Southampton, the band has only been active for just 3 years and in that time, they have taken some giant

scene. In this short space of time, Slackrr have been touring and playing over 280 shows and festivals

across the UK with positive feedback coming out of their ears. Their single, ‘Playing With Fire,’ which

premiered at New Noise Magazine, achieved airplay on Kerrang! Radio Fresh Blood, which led to them being

featured artist of the week on Kerrang, and their latest single, ‘Waves’ received praise from Rock Sound

Magazine. In 2019, the band were asked to play the legendary Isle of Wight festival as headliners on the

Platform One stage on the Friday night. Their self-released official studio debut album ‘Time, It Wait For No

One,’ was also released on the same day, on the 14th June. Due to the hugely positive reception to their live performance the band have been invited back to Isle Of Wight Festival 2021. Having recently signed with Word Is Bond Inc Management,

They have supported the likes of The Bottom Line, Sonic Boom Six, Press To Meco, PKEW! PKEW! PKEW!,

as having performed and toured across the UK in some of its most prestigious venues, including The 1865