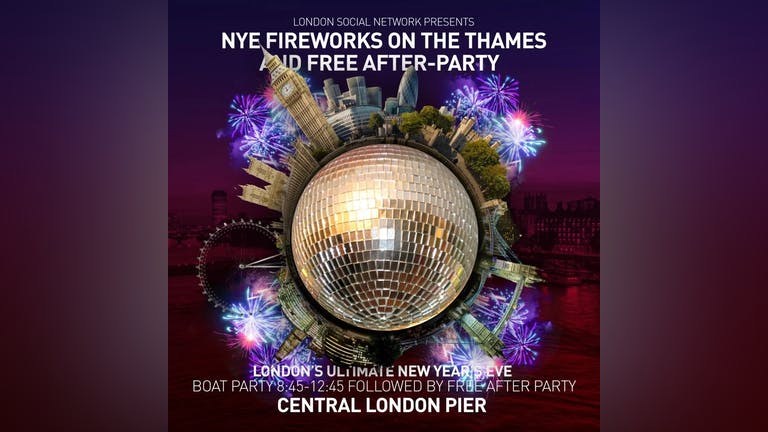 Fireworks on the Thames and free after-party

++ As close as it's possible to get the best Fireworks view ++

New Year’s Eve in London just wouldn’t be the same without the firework display above the Thames: always spectacular, always show-stopping – and always a nightmare to get a decent view of if you’re fighting for a place along the riverside. it guarantees you front-row seats for the fireworks when Big Ben chimes twelve (and we aren't exaggerating when we say front-row seats, these vessels are as close to the fireworks action as you can get).

One of the best things about London nightlife is the big boat party and we give you the opportunity to party hard while taking in the amazing skyline and sights of London that can only be seen along the Thames! (and on New Year's Eve they are amazing with the world's best Fireworks display)

Start the night early, get to the dockside at 8.45pm but don't be late as the party boat sets sail on the dot at 9pm. The boat features TWO decks of music, a pub priced bar and an open deck to enjoy the view...but don't worry the boat is heated and air-conditioned too.

+ Two decks of London's finest DJ's
+ Covered Open-air guaranteed the best view of Fireworks from the center of the River,
+ Views of London's Landmarks
+ Cash bar on the boat at pub prices
+ free after-party Space (worth £45 with big-name DJ's over 4 floors

On the boat you will be given a wristband for free entry to the after-party worth £45 Its just 15 mins away, less on the free tube and runs till 5am with its own after-party too/