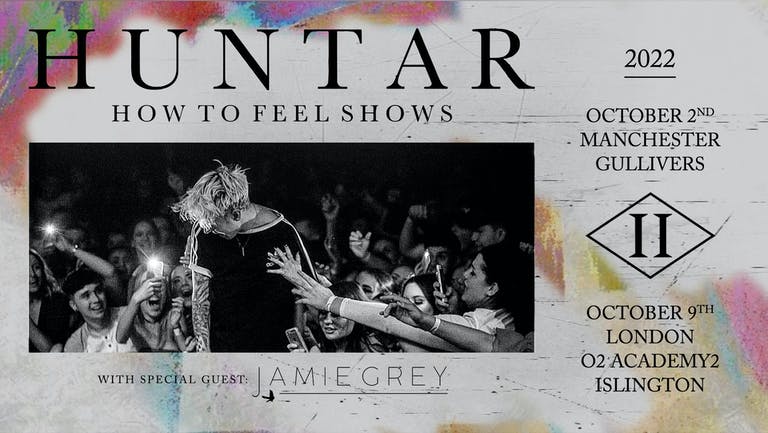 HUNTAR is a poignant lyricist that coins the perfect soundtrack to your life with a song fit for every mood-based playlist. Originally known as an acoustic singer-songwriter, HUNTAR found himself moving to the country’s capital of London at the age of 19 where he developed his signature sound in a unique blend of RnB and pop.

His debut EP, ‘BITTER’ garnered support from BBC Radio 1’s Annie Mac & Beats 1’s Zane Lowe, leading up to his inaugural performance at Radio 1 Big Weekend. With features from the likes of Gucci Mane on his spin of Ginuwine’s classic hit ‘Pony,’ HUNTAR continued to show his intention of cementing his spot in the music scene. His ever-growing fanbase saw him as the support act on Zak Abel’s tour and went on to sell out a string of solo shows across the UK & US.

After landing his track ‘ANYWAY’ on the FIFA ‘17 soundtrack and surpassing over 30 million streams on Spotify alone, the time came for HUNTAR to share his debut album ‘THE RIDE’ with the world in 2018. To his fan’s delight, the 10-track album gave them the emotionally charged sound that HUNTAR has been praised for by the likes of Wonderland Magazine, Nylon, Noisey, Billboard and many more.

His poignant lyrics make for the perfect soundtrack to your life with a song fit for every mood-based playlist.

While taking a year off to focus on writing new material, HUNTAR’s fans loyally continued to drive over 3.9 million streams during 2019 alone. Now that 2020 has arrived, HUNTAR is back and ready to give fans what they’ve been patiently waiting for with a sound he coins as “Cinematic RnB”.